Every coworking group needs a place – some space to work, to coexist, communicate, cooperate, collaborate, to … cowork.

For Cowork Frederick, it all started when, having visited countless cities and towns in Virginia, Maryland, Pennsylvania, and North Carolina to find the place we wanted to live, we (Glen and Julia Ferguson) were house hunting in Frederick, MD. One of the “houses” our realtor, Christina Brockett, showed us was 122 E Patrick Street. 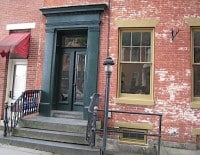 122 E Patrick was in no condition to be anyone’s home (more on that later), but we loved it anyway. As it turns out, Glen had recently read about coworking and raised the idea of opening a coworking space as part of his exit plan from “corporate America”. We’d been in this great building in the heart of historic downtown Frederick no more than five minutes when, almost simulaneously (we did a mind-meld when we got married), we decided this was the perfect future location of a coworking site.

It was clear, as plain as black and white (like the paint job). It just felt right. Quite a few months and several rounds of negotiation later, 122 E Patrick Street was ours. Then the work began. But, that’s a topic for another chapter, Chapter 2 to be exact.