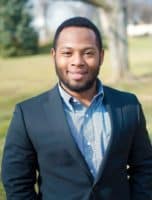 Teddy Galloway is an entrepreneur and instructor with a big vision for the world. After spending the last 15 years responding to and teaching others how to respond to emergency situations involving chemical, biological, radiation, and nuclear weapons he is ready to launch a series of projects targeting a cause closer to his heart. WeThrive is a project aimed at serving and equipping underprivileged youth in the Frederick area through mentorship and leadership training.

Meeting Teddy today you would never guess the level of struggle he witnessed growing up. He spent his childhood in Frederick living in a pocket of the community blanketed by a perpetual sense of hopelessness. The oldest of 6, Teddy’s mother worked tirelessly to provide for her family as a single mom. Drugs, poverty, and violence formed the backdrop to his formative years. He was a child with big dreams and ambitions, but his circumstances made those hopes for the future seem far-fetched.

Sometimes it takes peoples who care enough to step in and help us see a world outside the one we know. For Teddy this shift in perspective came through a childhood friend’s family, the Lauer Family. A stable family with a father who was present and involved had a huge impact on him. He describes his friend’s father was one of his first examples of what it meant to be a man and what it was possible in the world.

There is an innate quality of leadership in Teddy that others recognized at an early age. While he was in still school, faculty and staff encouraged the development of skills that would accelerate Teddy’s personal growth by enrolling him in special leadership programs and training and. These external influences planted the seeds of hope in Teddy. As he grew, so, too, did his desire to do more than simply survive like so many he knew. Teddy wanted to thrive. 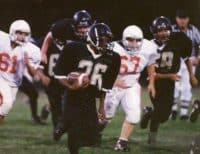 Because he was a gifted athlete in high school, many wanted to believe Teddy’s ticket to college lay in a football scholarship.

It came as a shock when Teddy decided to skip the easy path and joined the Marine Corps. He wanted to gain discipline. He wanted to learn how be a man and he saw the Marine Corps as being the perfect way to start that journey. Besides, after the terrorist attacks on 9/11, Teddy says he just couldn’t see going to college.

During his four years in the Marines (2002-2006), Teddy worked as a Chemical Biological Radiation Nuclear Defense and Response Instructor (CBRN). He cites the sense of camaraderie and the self-awareness he gained among his most valuable experiences. He also learned how to work as a part of a team. His plans paid off. Much of the professional work he has done for the last 15 years has been focused on teaching military planning and operations,

After his enlistment ended, Teddy used the GI Bill to go to college at George Mason University where he studied Global Affairs with a concentration in the Middle East and North Africa. His time in the service had led him to ask questions about the American presence overseas and how people were being treated. In his early twenties Teddy already had a desire to change the world, but he felt that, in order to affect change, he needed to first understand. Studying the religions that shaped the regions, the history, and the culture of the peoples around the world was a major step in Teddy’s path to understanding how he could make the world a better place.

In September of 2012 Teddy had just come back from finishing his final semester of college abroad in Paris when he met his future wife, Amber. They met at a common friend’s birthday party and hit it off instantly. After dating for 6 months the two moved in together. Following one of Teddy’s childhood dreams, they relocated to San Diego where they fell in love with the beautiful weather and the abundance of vegan dining options. Amber and Teddy could have happily continued living out west, but Teddy’s long-term plans had always involved returning to Frederick to give back to the community in which he grew up.

Even though he had succeeded in building a life bigger and more incredible than the one he had dreamed of as a child, Teddy couldn’t be satisfied keeping his success to himself. For 15 years he had been growing and learning so that he would be ready for the right time to build back into his community in a way that honored those who had helped him as a child. Teddy realized that now was time to take all of his leadership skills and apply them to serving the underprivileged youth of Frederick County.

Teddy is now focused on mentoring youth through a variety of support groups aimed at everything from support for drug addiction to homelessness to leadership training. WeThrive’s goal is to help train and grow future leaders. It offers an online academy with courses focused on setting and achieving personal goals, leadership, teamwork, and character development for those transitioning in life. The programs are still in their early stages, but just a few minutes of discussion with Teddy about them reveals a passion and commitment to helping others that is more than strong enough to weather the potential challenges of community service.

Finding Cowork Frederick has proven to be a serendipitous match for Teddy’s current projects. He happened upon Cowork Frederick and immediately fell in love with the idea of a community workspace. He says this is where he goes to be inspired and motivated by other entrepreneurs. It’s also a great space to hold business meetings.

For now Teddy, Amber, and their son Micah (8 months) are resisting the urge to return to the warmth and sunshine of Southern California, though he says the winter months in Maryland make it difficult. Getting outdoors, throwing the football around, and spending time with his family and their dog, Mya, are his favorite ways to recharge. Building a better world can be tiring work after all! But Teddy’s approach is to reach one person at a time, helping them embrace their individual stories and equipping them to see how it fits into the larger story of mankind. If anyone has the energy and drive to start a worldwide revolution for change, Teddy is unquestionably that person.