My first memory of Jennifer Gerlock is from early Cowork Frederick members defined her as someone  “who ABSOLUTELY HAS to join Cowork Frederick”. I later met her – briefly – at an AAF Christmas Party. Soon she was stopping by for meetings with Cowork Frederick members.  She began promoting us, introducing us to Ananda at WHAG, who did a news story. The timing wasn’t quite right for Jennifer to sign up for a membership, but there was a clear fit and I think we both knew it was just a matter of time.

Jennifer (“Jen”) was born and raised in Mt. Airy and attended high school, along with Cowork Frederick member Jim Robinson, at Linganore High School. She “quit Girl Scouts because it was too hard”, something that makes a contrarian stand against everything else one could know about her. She now jokingly describes herself as “fleet of foot, sharp of wit, keen of focus. Able to juggle deadlines, help with homework, complete marathons, write captivating copy, and leap tall buildings in a single bound.” Continuing, she notes “I am the mom of two kinetically energetic boys whose enthusiasm for life and fun knows no bounds, so I’m more than well-armed for anything anyone in the business world can throw at me.” Indeed. Jennifer is one of the most high energy, most connected (go ahead – Google her name – I dare you), focused and generally impressive people I know.

Her first job out of college was with the Association of Realtors, but her career really began to take shape with an unpaid internship – while also waitressing to make ends meet – at the Country Music Association (CMA) in Nashville, TN. “My thought was, if it is an industry I wanted to get into, I would have to show some gumption and start making myself known,” she explains. It worked. She secured her first job in that industry as an assistant publicist at Evelyn Shriver PR, where she assisted in public relations and artist management.

In 1997 she “switched to the dark side” as she describes it, and became a reporter at Sony Worldwide Networks / Launch Media.  She was flown to LA, NY and even the Bahamas to interview the likes of The Eagles, The Moody Blues, Clint Black, Faith Hill, Garth Brooks, Tim McGraw, and Shania Twain. She was soon promoted to Bureau Chief. She also freelanced as a feature writer, writing three cover articles for Country Song Roundup Magazine and the New York Times Syndicate.

While in Nashville she met Michael, the man who would become her husband. When they started a family, the couple decided to move back to the Frederick area. Jennifer took a job the YMCA as the Director of Public Relations and Community Development. She thrived in this role for over six years, embracing the connection to the Frederick community that came with it. Ever striving to balance career with family, Jennifer left the YMCA to become an Independent Consultant specializing in social media, event planning, public relations, marketing and copywriting. Keeping herself hopping as always, she was also a contributing writer/blogger for the Washington Times Community and Frederick News Post.

She took a turn at launching her own business in 2010, Want2Grow. “I went into this kicking and screaming”, she joked, “I didn’t have a lot of confidence about running a company, but my business partner was ready. I learned a lot.” It was the kind of learning you can only get from experience, a wisdom about people and business and how the world works. It was a great experience, but after about three years it was, once again, time to move on.

“I’m famous for having multiple jobs at once,” Jen noted as she listed the magazines where she contributed articles as a freelance writer (Maryland Life, Frederick Magazine, Want2Dish.com), while also co-running Want2Grow. She also served on the board of the Greater Frederick branch of the American Advertising Federation. Oh, and in 2009 she also founded Momz Share, a Washington DC Metro Area quarterly networking group for mom bloggers.

Being her own boss offered tons of flexibility, but demanded a lot in return. “You have to spend so much time marketing yourself, it’s hard to find time to do the actual work. Business development isn’t my passion. I like getting things accomplished.” Most of all Jennifer enjoys working with companies with vision, who want to make a difference, “companies who want to foster change and new ways of thinking”. She has “a passion for the unusual and a thirst for the unconventional.” 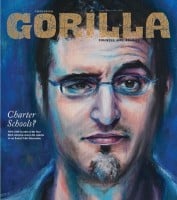 She found that at the Frederick Gorilla magazine, an alternative current events and cultural arts publication that takes a fresh, unique and offbeat look at business, life and politics in Frederick County. She began as Social Editor and within months was promoted to Executive Editor of the magazine as well as Marketing Director of Graphcom who publishes the Frederick Gorilla. “I love their motto: ‘Our work is our play.’ We are very hard working team, very passionate, and very, very fun. We’re like family.”

“I never could have predicted the path that brought me here,” she reflected.  “It’s been such an amazing journey.” What did she learn along the way? “Success comes from relationships. Be kind, attentive, genuinely caring about other people or their cause. People can tell if you’re not genuine or if you have an ulterior motive.”

“While interning at the Country Music Association, I learned that essentially, it’s all about who you know and how you treat them. Everyone is connected.” One example that stuck with her? “I had an appointment to interview Garth Brooks once. This was at the pinnacle of his success – he was the #1 best-selling solo artist worldwide at the time. When I arrived, he walked right over to me and asked how my son was and demanded to see his baby pictures. It doesn’t matter if he had someone prep him before hand, it matters that he cared enough to do it and I could tell he meant it. He made the effort to know about me as a person and to show interest. He even sent flowers to the hospital when I had my second child. It is an example that has stuck with me my entire career.”

Other keys to her success? Her accountability group. “It helps keep me on track. Accountability partners are really good at helping you not lose yourself to the job, or any one role you play. They help you keep all your goals in focus and in balance.” 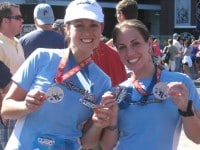 Balance for Jen comes, in part, from running. She called her first marathon a “life changing experience.” “I thought I would do only one, but it gave me such a sense of accomplishment I just kept going. For me, running makes me feel that I’m more than just a mom, a career, a worker.” She will run the NYC Marathon this year – her sixth. “There’s just something badass about running a marathon.” Indeed.

Jennifer credits Cowork Frederick with being key to the transitional period from “my own personal limbo to where I am now”. “It’s a sacred place to me,” Jen said, driving the point about how important she views her early days at Cowork Frederick. “Cowork Frederick was filled with creative people I could collaborate with, bounce ideas off of. So many of the people I really rely on now, I met at Cowork Frederick.” Noting that she’d work there all the time if she could (she’s a part-time member), she went on to say there’s “something about the design of the place and the dynamic environment (the space and the people) – it just breeds creativity.”

Jennifer has been a valued member of the Cowork Frederick community for over a year now. Many of our best events have been somehow linked to her and it’s always a good day when she brings her own creative energy into our space.