Cowork Frederick announces a party to celebrate five years of coworking in Frederick. The party will highlight our mission, key contributors to that mission, and raise funds for improvements to our work space.

We launched Frederick’s first and only coworking space after learning of the global movement that is revolutionizing the way independent workers work. At the heart of that movement is a belief that society is facing unprecedented economic, environmental, social and cultural challenges and a desire to address those challenges by facilitating connection, sharing resources, lowering hurdles to launching a business, providing a support infrastructure, and allowing people to be a part of something while still pursuing their own goals.

After an extensive renovation of a building in historic downtown, Cowork Frederick opened in September 2012 and is now home to a diverse community of 40 software developers, social media consultants, writers, engineers, scientists, project managers, and other professionals.  Along the way Cowork Frederick members came together for “lunch & learns”, happy hours, and round table discussions. They practiced pitches and collaborated on projects. They raised funds and contributed time and expertise to local charities. Cowork Frederick has also hosted technology, startup, and social impact meetups and featured art from local artists in their work space. 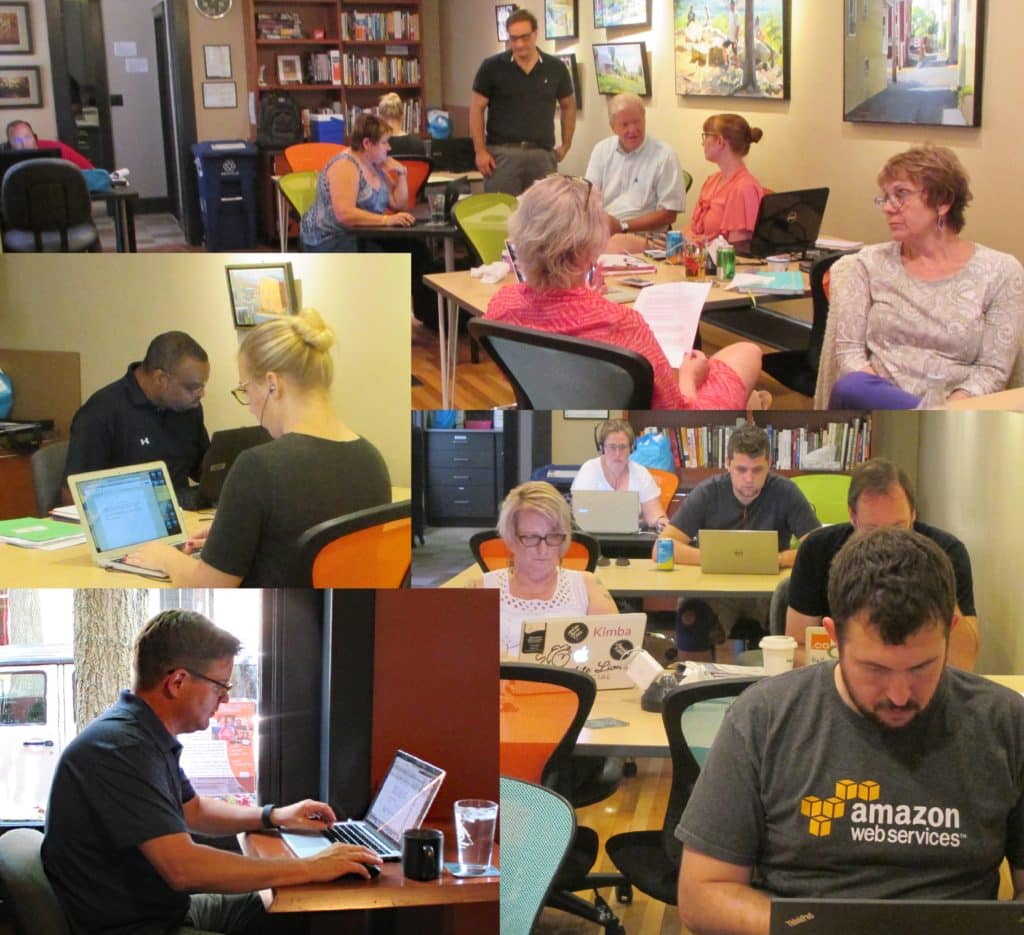 Cowork Frederick has promoted an economic engine focused on collaboration, with autonomous workers who come together at will for specific purposes, with a flexible and healthy life balance, and success measured by how work enriches the world as well as the individual.

Members of Cowork Frederick found success, better life-work balance, and a few friends along the way. Sandy Sponaugle, CEO and Founder of Platinum PR and a member of Cowork Frederick from 2012-2014 noted, “I’ve worked at shared workspaces and a leased office. There is no comparison. At Cowork Frederick, I’m part of a community where others are also growing their own business.”  Teleworkers, like Patrick Pierson and Kevin Lynch, are recapturing time by avoiding a daily commute. Thomas Brett Talbot, MD, an entrepreneur in creative design, medical simulation and IT concept development, gets to the heart of it: “We cowork for some of the same reasons we go to church. We need to be connected, to be part of something bigger than ourselves.”

In year six, Cowork Frederick plans to roll out a non-profit foundation and several new programs, including Cotivation ™, an accountability group that marries coworking with a support structure to keep participants motivated and successfully moving toward their goals, and Colearning, collaborative learning where people share resources and skills, evaluate one another’s ideas, and build knowledge while building their network.

Celebrate Cowork Frederick’s 5-year anniversary with food, drink, awards, a look back at their history and a glimpse forward into the future. All ticket sales will go toward improvements that directly benefit the freelancers, teleworkers, and entrepreneurs who call Cowork Frederick their work home.

Those who have helped make Cowork Frederick successful will be recognized with awards. There will be a drawing for door prizes, including a free 3-month full-time membership. Heavy hors d’oeuvres by Savory Spoon will be served. Children are welcome. A special arts and crafts room will be available where children ages 2 and up can play and create, supervised, while adults enjoy the party.

Cowork Frederick’s mission is to be a catalyst for the success of freelancers, teleworkers and entrepreneurs by creating ways for them to come together to work, share ideas, and support each other. Our diverse coworking community consists of people from a wide variety of backgrounds and professions, for-profits and not-for-profits. We provide a work-friendly environment, meeting rooms, high speed internet, and the usual office amenities at an affordable price. More important, members of our coworking community benefit from a support infrastructure, a chance to connect with and help others, and a place to belong. For many, it’s just a better way to work.  For more information about Cowork Frederick go to https://www.coworkfrederick.com/ or call 301-732-5165.