September 2016 marked Cowork Frederick’s four-year anniversary. We celebrated with a Birthday Bash & Charity Event that launched our Charity of the Month program, which has us helping one local charity each month. But, I’m getting ahead of myself. We’ve come a long way in four years and this post is about that journey and the lessons learned along the way.

Our coworking journey began in 2009 when Glen, my husband and business partner, read about pioneers of the movement like Indy Hall, New Work City, Gangplank, and NextSpace. We were drawn to the communal aspects of sharing, pitching in and helping each other. We both had teleworked and understood what it was like to work alone at home. We both also had launched our own businesses and knew the challenges of doing that on your own. We thought coworking was an obvious solution to those challenges and wanted to be a part of the coworking movement.

Six months later we moved to Frederick, MD and began spreading the word about a future coworking community and getting input from potential members. We purchased a building at 122 E Patrick St and began renovations while we continued to spread the word and connect with people who were interested in coworking.

Cowork Frederick opened in September 2012 with much excitement about what was to come. We were blessed with a great location in the heart of historic downtown Frederick, a fantastic show of support from the Frederick Chamber of Commerce, City of Frederick and the Downtown Frederick Partnership, and a community made up of 20 awesome members (already – the day we opened). There was promise in the air and we were high on it.

The road ahead had ups and downs. We’ve learned a lot, like how bad it can be to run out of coffee – just kidding – sort of. What follows is progression of other lessons in our continued effort to find the right touch, the right way to lead, to encourage, and how to be (or not to be) in a coworking community when you are also, technically, the owner of the building and the business. Read on.

Lesson 1 – This is harder than we thought.

We heard about the ‘accelerated serendipity’ of coworking and thought by putting people together in the same space, ideas would bounce around like atoms and cause a chain reaction. Just like that, our community would rise up and do great things. We just needed to create the right environment and provide the right support. Finding the “right” in that is tricky. We saw some people and businesses thrive but too many faded into the background and disappeared.

Coworking communities are, by design, fluid. Members come and go for all kinds of reasons. The size of our community doubled to 40 by year two, then quickly dropped back down to 20, then slowly rose again and has held at roughly 35. We weren’t seeing the growth we wanted (and needed).

We went into this gig knowing it wouldn’t make us rich. We were told to plan to make our money elsewhere. That was fine, but we quickly noticed a problem. We were busy organizing events, dealing with billing issues, updating the website, troubleshooting printer issues, giving tours, writing blogs, engaging members of the community and helping them connect, taking out the trash, making coffee, stocking the break room … you get the drift. It’s hard to find time to even breathe, let alone time to pursue your own work outside of your coworking business.

Lesson 2 – It takes a village.

Openness is a core value of coworking and yet it didn’t occur to us until well into our third year such openness could include us being transparent with our members (and thus vulnerable). We shared our challenges, limitations, and our hopes and dreams with our members. We shared Cowork Frederick’s financials. We welcomed ideas on how to bring in more money and reduce expenses. We explained we needed time to do our own work so we could make a living. We asked for help. Members began emptying the dishwasher and taking out recycling. They did tours and helped each other figure out why the printer wasn’t printing instead of always coming to Glen or to me.

When it came time to plan our four-year birthday bash, I asked for volunteers. A member stepped up immediately and brought experience and knowledge I didn’t have and carried a big part of the work load. The event raised $1042 for the Student Homelessness Initiative Partnership (SHIP) of Frederick County, exceeding our target of $1000 – no way that would have happened without teamwork.

Lesson 3 – Community is a verb

OK – not really, but commune is. Community (noun) and commune (verb) share a common root, the Latin communis.  What’s that song say, “Love isn’t something that we have; it’s something that we do”? Community is defined by Merriam-Webster as “a unified body of individuals, a state, commonwealth; an interacting population of various kinds of individuals in a common location; a group of people with a common characteristic or interest”. Now look at this: to commune means “to communicate with someone or something in a very personal or spiritual way, to communicate intimately <as in, commune with nature>”.  Do you know that feeling – that feeling of oneness, of connection, of being part of something? That’s the goal.

Community is a buzzword in coworking circles and we used it like it was magic, as if by saying “community” instead of “workspace” we would be one. Don’t get me wrong; a lot of great stuff has happened at Cowork Frederick, but too many never quite connected. We wondered why. Here’s the lesson: to have community, you must actively commune. Communing forms the connection and makes a community strong. So, how do you get people to commune?

Lesson 4 – Working together does not equal community.

Indy Hall and others like them made launching a coworking space look so easy. They shared their recipe (build the community first) and we followed it – or so we thought. We found people who wanted to join Cowork Frederick before opening our doors for business. We did fun things and work things and learning things together. We helped people connect. Sure, there were shining examples of great things happening, but they were isolated. Why was our broader community not catching fire? 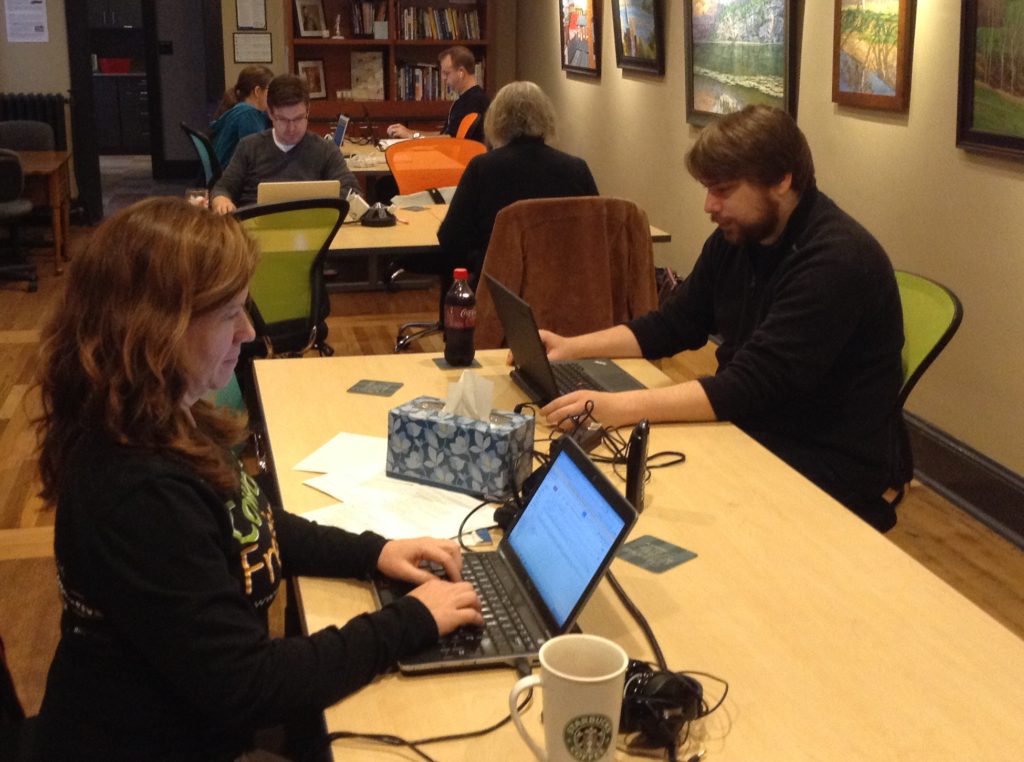 It took a while, but we finally figured out the coworking communities we envied started with people who wanted to work together, not people who wanted to be a member of a coworking space. Most of our members met the day we opened. Like kids showing up for the first day of school they had some things in common, but didn’t know each other. Signing a coworking membership agreement and showing up to work there doesn’t make a person any more a part of a community than signing up for a gym membership and going there to work out. It just creates an opportunity to meet someone of similar interest. That opportunity is a great thing, but it’s not enough.